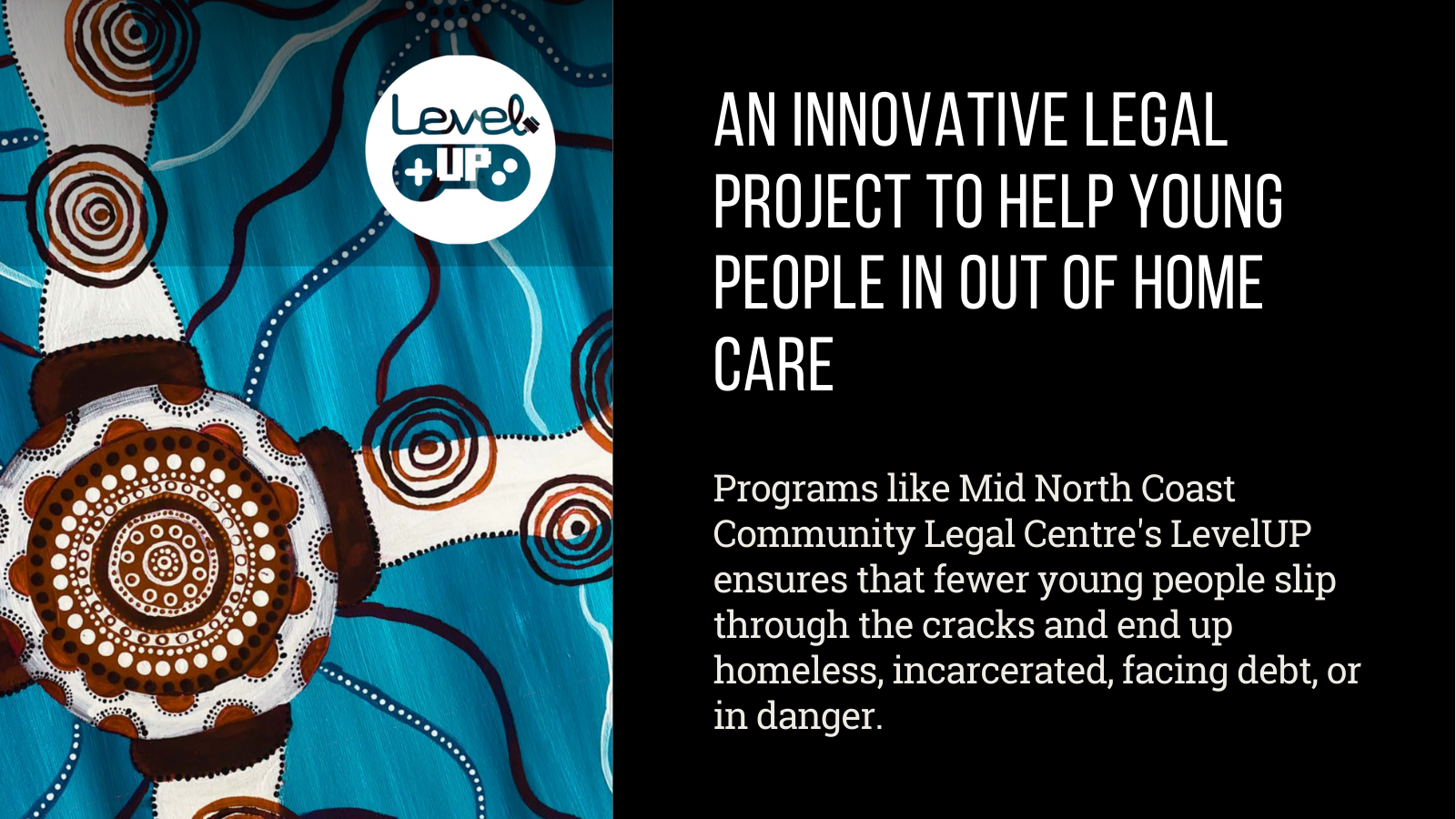 We first met Harry* when he was 23-years-old. A homelessness service referred him to us. After he left out of home care as an 18-year-old, Harry returned to live with his birth mother in Coffs Harbour. His relationship with his mother broke down when she began drinking alcohol after being sober for four years. Harry’s mother became violent, and he was left homeless.

Harry was sleeping in his car and was being harassed by debt collectors. He’d accrued several fines, had debts with Telstra, and a gym membership that he’d stopped using since he became homeless. Centrelink had also raised a debt of $6,000. During his last year of high school, Harry had several mental health issues, and he didn’t fulfil the attendance requirements of Youth Allowance.

Harry’s experience highlights some of the significant legal issues that young people exiting out-of-home care and moving to adult legal responsibility can encounter. While it’s a key transition point in their lives, a lack of ongoing support once a young person turns 18 contributes to diminished life outcomes when compared to the general population.  This cohort of young people is vulnerable through no fault of their own, their upbringing largely having been shaped by state intervention.

Young people exiting care are more likely to experience homelessness, domestic violence or neglect, drug and alcohol abuse, incarceration, financial hardship, and mental health issues. In NSW – the jurisdiction with the highest rate of children in out-of-home care – research shows that 68% of young people indicated they had been homeless during their first year of independence.

That’s why we started our LevelUP program in 2018. Through a grant from the Law and Justice Foundation of NSW, a team at Mid North Coast Community Legal Centre provided specialised legal advice, education and support to young people transitioning from out-of-home care. Our approach has been grassroots, with the aim of providing targeted, tailored, timely and appropriate support to this young cohort.

In Harry’s case, we needed to prevent the civil legal issues he was facing from escalating further. We helped him to complete a Victims Support application in relation to acts of violence he’s experienced throughout this life. He received an Immediate Needs Support Package of $5,000, which allowed him to secure rental accommodation and purchase a fridge and a washing machine. He later received an additional $20,000 in recognition payments from Victims Services. We also helped Harry collect medical evidence so that he could review his $6,000 Centrelink debt, which was subsequently waived. The LevelUP team negotiated with other debt collectors who were harassing Harry and had these debts waived on compassionate grounds.

Over the course of two years, we supported 45 young people across the Mid North Coast FACS region. All of the young people we assisted were living with a disability or mental illness, and all of them were financially struggling. A significant proportion had been incarcerated, experienced unstable housing, were in a violent relationship, or had children of their own at risk of removal. 50% of our clients identified as Aboriginal or Torres Strait Islander.

Unlike traditional legal models, clients referred to LevelUP did not need to have any identified legal issues to initiate contact with us. From there, we took a multifaceted approach. We began with a ‘legal health check’ to holistically assess a young person’s needs. After that, we engaged in legal advice and case work, with the most common issues being complaints against government agencies, victim compensation, domestic violence, fines, debt, and social security. Community legal education was also important, and we supported young people to understand their legal rights and responsibilities.

Critical to the success of the program was our ability to meet young people where they were at – physically, by travelling to a convenient location for them, and socially. The project solicitor Stacey McMillan engaged informally with clients, on their terms. Because we’re a community legal centre, Stacey was viewed as being independent and ‘outside’ the government system.

Young people responded particularly well to the principle of instructing a solicitor to act for them. Clients felt empowered by this dynamic, which meant they could meaningfully participate in decision making about their own lives. Some contrasted this to their experience of feeling voiceless within the state system, or disempowered working with mandatory reporters who made decisions on their behalf.

Levelling up in the future

Our funding for LevelUP came to an end in December 2019, but we’ve continued to work with young people transitioning from out-of-home care in the time since. It is our view that the government lacks a sufficient awareness of the complexity of the unmet legal need and the significant social and economic marginalisation that young people exiting out-of-home care experience.

Our experience running the program has only affirmed our belief that the government needs to commit ongoing funding for a free legal assistance program targeted at young people leaving out-of-home care.

Such a service needs to be flexible, trauma-informed, accessible and grassroots. We don’t need another big government agency, but a local service that is in touch with community and has established strong relationships with other local service providers. The design of any future program should include an Aboriginal and Torres Strait Islander Engagement worker. Half of the young people we supported in LevelUP were Aboriginal or Torres Strait Islander people, and many were dealing with the generational trauma associated with colonisation and state intervention. They have specific social and cultural needs which must be safeguarded.

Without the help of LevelUp Project Solicitor Stacey, “I would be worse off. In a dangerous situation”, one person said.

“Stacey is the only person who has heard, listened, and engaged with me,” said another young person. “Prior to this, no-one was there to help. They just wanted a paycheck. Stacey actually cares and wanted to help me.”

*Not his real name.